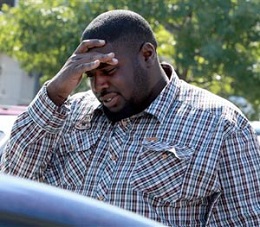 Suspect's attorney wants the charge dismissed because he doesn't expect Darren Wilson, who didn't attend the preliminary hearing, to show up in court

CLAYTON, Mo. — A drug case stemming from an arrest made by the Ferguson police officer who killed an unarmed 18-year-old is on hold while a grand jury reviews the shooting.

A judge approved prosecutors' request Monday to send the case involving an arrest by officer Darren Wilson to a St. Louis County grand jury. But a spokesman for Prosecuting Attorney Robert McCulloch later said that the case is "on hold" until Wilson's status is resolved.

The suspect's attorney wants the drug distribution charge dismissed because he doesn't expect Wilson, who didn't attend the preliminary hearing, to show up in court.

A separate grand jury is reviewing evidence in the August shooting death of Michael Brown.

A county judge on Monday approved a request by prosecutors to let a grand jury review a 2013 drug case in which an arresting officer was the suburban St. Louis police officer who fatally shot 18-year-old Michael Brown last month.

An attorney for Christopher Brooks alleges Ferguson officer Darren Wilson "roughed up" his client after he refused to hand over the keys to a locked car parked in his grandmother's driveway, where police say they found drug paraphernalia and several ounces of pot.

"Wilson is compromised as a witness," said defense attorney Nick Zotos, who opposed the request by Prosecuting Attorney Robert McCulloch's office to shift the drug case to a panel that meets behind closed doors.

It wasn't clear whether Brooks' made the allegation against Wilson before or after Brown was killed, and the prosecutor's office provided no immediate comment.

A police union attorney who has spent decades representing members of law enforcement in court told The Associated Press Monday that he represents Wilson, who is under a grand jury investigation over whether he used excessive force in the August shooting death of Brown.

Wilson, 28, received a Ferguson City Council commendation for his role in Brooks' arrest in February 2013. Zotos questioned whether the honor was merited.

"We give trophies every day for just showing up," he said after the brief hearing in St. Louis Circuit Court. "If you play on the team, you get a trophy."

Zotos wants the marijuana distribution charge against Brooks dismissed because he doesn't expect Wilson, who did not attend the preliminary hearing, to show up in court.

The same grand jury also is reviewing evidence in the Aug. 9 death of Michael Brown to determine whether Wilson should face criminal charges in a shooting that led to violent protests, hundreds of arrests, the summoning of the Missouri National Guard for security and international attention. McCulloch has said he expects the grand jury to complete its work on the Brown shooting by mid-October or early November, though its term has been extended until January.

The assistant prosecutor, who did not publicly identify himself in court, did not indicate during Brooks' hearing why the county wants to shift the case to the grand jury.