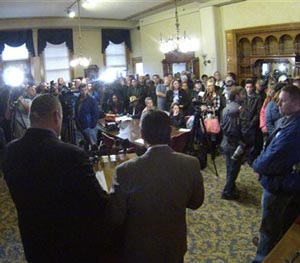 MILWAUKEE — A Milwaukee police officer fired after fatally shooting a mentally ill man told superiors he became concerned about his safety as soon as he saw the odd way the man was lying on the ground in a downtown park, according to documents released Thursday.

Police Chief Edward Flynn fired Officer Christopher Manney, 38, on Wednesday, saying he believed the officer had wrongly instigated a fight that eventually led Manney to shoot 31-year-old Dontre Hamilton 14 times, killing him. Manney had responded to a call for a welfare check because Hamilton was sleeping in the park.

Hamilton had schizophrenia and had recently stopped taking his medication.

The police union on Thursday released a written account Manney gave Flynn in which the officer said he found Hamilton on the ground with "one leg bent at the knee and rapidly twitching back and forth. No other body parts were moving."

Hamilton opened his eyes as Manney approached, fixing him with an unblinking stare "that made (me) feel as if he was looking through me and wanted to hurt me," the officer wrote.

Manney, who had 13 years with the department, said he concluded Hamilton was either mentally ill or under the influence of drugs or alcohol. He also thought Hamilton appeared homeless.

"I know that most homeless people I've dealt with have knives on them or some kind of weapon on them to fend off other homeless persons or persons that may pose a threat to them as they sleep and live in public areas. ... I felt compelled, for my safety, to conduct a pat-down search of Hamilton for weapons," he wrote.

Hamilton's family has said he was not homeless but apparently ended up in the park after having a sleepless night. His brother, Nate Hamilton, said he was well-dressed and had more than $100 in his pocket.

The union released Manney's account after a news conference attended by dozens of police officers backing him. Union President Mike Crivello said he expected Manney to appeal his firing and the union would support him.

"Dontre forced this situation, not the other way around," Crivello said.

He criticized Flynn for second-guessing an officer's split-second decision in a stressful situation and predicted Manney's firing would make other officers reluctant to act. Officers cheered when Crivello added that the firing was eroding confidence in Flynn's ability to lead.

Asked for a response, a spokesman referred to comments Flynn made the day before. The chief said then that the public would not trust the department's "defense of justifiable police action if we fail to hold ourselves accountable when those actions are not justified."

While Manney correctly assessed Hamilton as mentally ill, he treated him not as someone who was sick but as a dangerous criminal, Flynn said. The chief also said he knew some officers would be upset by his decision.

By M.L. Johnson
The Associated Press